about a 6 minute read

3 Fundamental Traits for Success in your Creative Career

The following is an edited version of the commencement speech I gave to the Edmonton Digital Arts College 2019 grad class. I swear it was way more hilarious and inspiring in person.

When Jeremy approached me and said, “Jeff, I’d love if you could give a talk at the EDAC grad ceremony”, I assumed he wanted me to impart some wisdom or something. Then he said, “Yeah, everyone else is really busy.”

When asked to speak, I had two immediate thoughts. The first: he really could have left that last part out. Second: of course, it’d be an honour to. I really am excited to be here, and excited for each of you. Because 10 years ago, I was right where you are, and I remember what that was like. I graduated from a small private college, same as you.

Right after I graduated, I started an agency called Paper Leaf because I was too dumb to know any better. Today, Paper Leaf is probably considered a success. But back then? My partner & I started working out of a house. Super small time. I mean, I had a Skype meeting one time with a client where my two cats started fighting on the bed in the background. Real professional.

That first year in business, we did a total of $40k in revenue – revenue, not profit. When you split that between two partners, we were far below the poverty line. I couldn’t afford fancy dress hoodies like this one. 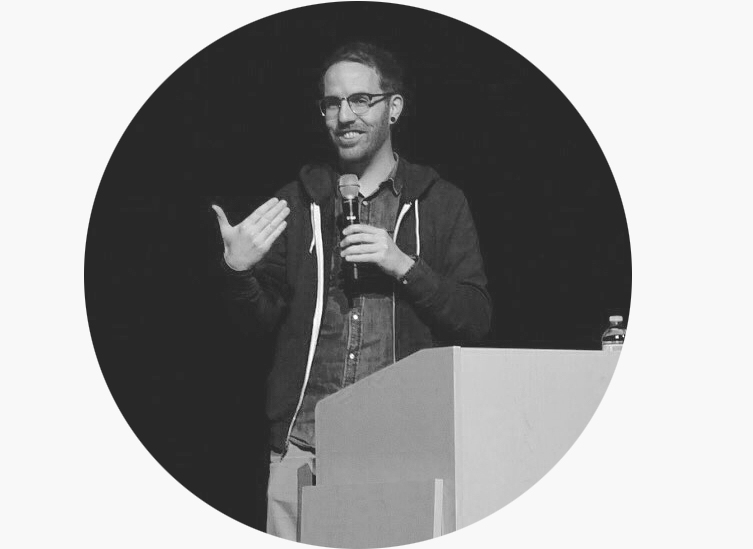 We did anything anyone asked us to back then. I designed business cards for a hundred bucks, and thought I had it made. One time someone actually paid me to clone-stamp out a guy from their daughter’s wedding photos. I was like “Sure! Why not?!” I built websites too back then, but let me be clear – I had barely any idea what I was doing. I don’t know how many times I brought a site down because I was cowboy coding on a production server. It’s still a running joke at the office.

Given all that stuff, it was entirely possible that PL could have crashed and burned in those first few years. That got me to thinking: how did I get from that graduation ceremony, where each of you are now, to where Paper Leaf is today? Why we were successful?

There’s a litany of reasons, but they all trace back to 3 fundamental traits. And that’s what I want to talk about tonight. I hope each of you will practice three things in your careers, from today forwards:

Let me expand on these, because each element is valuable in and of itself – but combined, curiosity, discipline, and memorability compound on each other and with them, you can have more success than Owen in a beard-growing contest.

So, why be curious? Let’s start there. Our industry requires adaptability, and progression, and growth. It requires not just wide learning, but deep learning. And the engine that drives these things is curiosity.

So be curious. Never stop. Be curious about your craft. Be curious about how a particular technology works. Be curious about people, and psychology. Be curious why that visual identity system won an award, or how the opening credits on that Netflix show were made. Curiosity begets learning, which will make you continuously better in your field. It shows coworkers, your boss, friends and clients you’re interested in them, which builds relationships – which are critical to your career progression. And speaking of careers, instead of being intimidated of your first interview that’s coming up, you know what you can do? Instead, you can be curious about it.

Curiosity is what drove, and still drives, the progression Paper Leaf follows as an agency. It’s one of the primary reasons we went from clone-stamping scumbags out of wedding photos for $50 bucks a shot to building the application that powered our entire province’s voter registration effort – a hugely complex, mid six-figure project. The reason we were able to take that project on was because we were unfailingly curious, and that curiosity powered 10 years of innovation and learning to the point where we could handle a project of that size and complexity. That’s the power of curiosity.

In your journey, alongside curiosity, I’d ask you also to be disciplined. There are times when your motivation will wane. You can’t control motivation – but you can control discipline. If curiosity is the engine, discipline is the fuel. So commit to your goals and the steps you need to take to meet them, but rely on discipline – not motivation – to get there.

I’m an NBA fan. Still waiting to get drafted, believe it or not, but I digress. I’m sure some of you know Steph Curry. He’s the greatest shooter in the history of the sport, after myself. I don’t know him personally but I imagine he doesn’t want to practice every day in the summer. But, even though he’s the second best shooter ever, guess what he does in the offseason? He makes 500 shots per day. He won’t leave the court until he hits 500. That’s not motivation – it’s discipline. Discipline that honed his skills, got him to where he’s at, and now is keeping him there, on top.

There’s another story worth telling, too. One from the creative industry, right here in Alberta. There’s a friend of mine from Calgary, who now lives in Vancouver. His name is Tim. He’s a huge sports fan – his personal logo is literally a baseball hat – and he worked as a designer at a small agency. In his spare time, he decided to commit to a self-imposed design exercise, where for 365 days in a row, he designed and published a sports-related graphic highlighting a game going on that day. Oilers vs Flames, Bucks vs Raptors, that kind of stuff. I’m sure along the way his motivation waxed and waned, and he had numerous reasons to skip a day. But he didn’t. He had the discipline to complete the exercise – 365 unique sports graphics, shared on social media. One year solid of work, day in, day out. Guess what? That discipline in turn landed him a job in the professional sports world as a designer.

That’s the value of discipline. When you combine it with curiosity and the craftsmanship you’ve learned here in school, you become super-powered.

And the last point I want to make is this. Be memorable.

The opportunities that arise throughout your career will be directly related to your personal network and the relationships you build, and will help you cross that bridge from opportunity to success. The more people you build relationships with, and the more memorable you are – for what you stand for, or what you’re great at, or how you treat people – the more options you’ll have in life.

You know why I hired our last team lead? Because she was memorable. She participated consistently in local industry events, and when I had an opening, her name was imprinted on my brain. Same reason why I hired our last developer: I went for coffee with him 8 months ago, and he was memorable in his passion for development and his loyalty to his previous firm. When his firm stopped offering web dev as a service, and I had the opportunity to offer him a job, I did.

That’s what I mean when I say “be memorable”. Be memorable, in your own way. In a way that is comfortable to you, and plays to your strengths. Be disciplined, like you had to be in order to sit here today, like you’ll need to be to achieve your career goals going forward. And be curious, about everything that crosses your path, with the same vigour that led you to choose and succeed in the program you’re graduating from today. If you do, you’ll cross that bridge from opportunity to success, and you’ll have yourself to thank.

So congratulations to every last one of you. You’ve put in the time and the work, and you should be proud of yourselves. Enjoy your time tonight, and remember – the best is actually still ahead. Good luck, and be curious, be disciplined, and be memorable along the way.